Things you'll find in this article

Cahir Castle – History And All The Things You Need To Know

This well-preserved castle has managed to retain most of its parts in great condition. When you visit, you’d be looking at a tower, keep and defensive walls that witnessed its long history.

The palace complex meanwhile is made up of courts. One is the inner court set to the north.  The other is the keep to the south which used to be a gatehouse.

Outside of the castle, the rocky islet where the castle was built had a great part in its long history. It was considered a good natural vantage point during the early times.

According to the ancient Book of Lecan, a fort was destroyed on this site in the 3rd century.  There’s also evidence that Brian Boru (926 to 1014) had a house here.

The Cahir Castle that we know today was from the 13th century, with additions made two centuries after. When it was built then, Cahir Castle was the largest and the most impressive during its time. It boasted of spacious courtyards, large halls, a  massive keep, and high defensive walls.

The construction of Cahir Castle was started in the 13th century by the Worcester or de Bermingham families. It was continued when the castle was granted to the Anglo-Norman Butler in 1375.

During the Elizabethan War, the Butlers of Cahir sided with the Irish.

In 1959, however, Elizabeth 1 sent the Earl of Essex and captured the castle after a 3-day siege. That was the first time that the walls were successfully breached by the English artillery.

Almost a century later, the castle was surrendered by George Mathews, to the parliamentary commander Lord Inchiquin. The conflict eventually ended officially two years later with the signing of the articles in Cahir Castle.

The Cahir Castle that we see now was largely the result of extensive restorative work in the 19th century.

Today, it remains to be an atmospheric and imposing structure that’s worth a visit. In 1975, the castle even served as a setting for the Stanley Kubrik classic ‘Barry Lyndon’

Currently, Cahir Castle is under the supervision of the Office of Public Works. Visitors to the castle get to enjoy a guided tour or a creative AVP called ‘Partly Hidden, Partly Revealed’.  A tour around the castle is definitely a must, especially if you’re into medieval history.

Cahir Castle has managed to retain most of its features. This is why the castle remains to be among the most visited in Ireland. After your castle tour, feel free to explore the nearby sites, which are just as interesting.

Formerly with the Butler Estate, Cahir Park which is also by the River Suir was converted into a golf course. With its richly timbered, vast lands, the park also became a popular hiking spot.

One particular route is the one that leads to the Cahir Swiss Cottage. This Swiss Cottage was intended to be a retreat from the ‘big house’ or Cahir Castle. The cottage also serves as a fishing and hunting lodge.

The town surrounding the castle and with the same name is also worth exploring.

From its rustic medieval origins, it is now an estate town. Stroll through the square and its adjoining streets and admire the impressive architecture. Walk further and marvel at the cut-stone buildings such as the railway station.

If you are looking for tours to the castle, here are some of our recommended Cahir Castle tours for you. 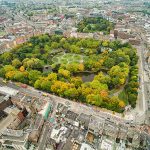